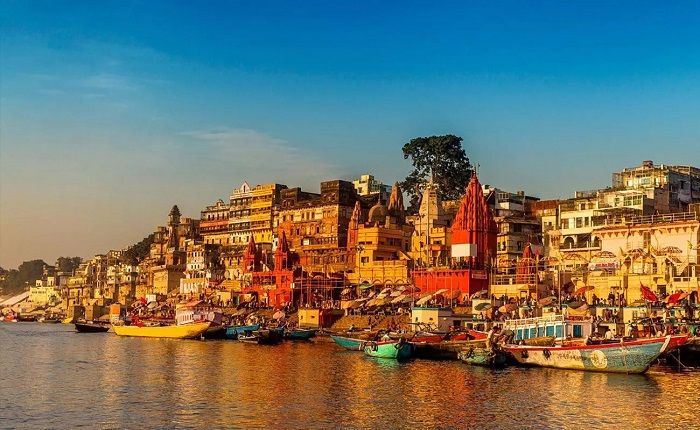 Varanasi is the oldest and the most sacred place for the Hindus. Varanasi, also known as the holy city, combines in itself the cultural essence and mysticism of India. Varanasi stands on the banks of river Ganga, considered the holiest of all Indian rivers. Varanasi or Kashi is both an exalted place of pilgrimage and a microcosmic centre of faith. A large number of pilgrims visit the holy city from all parts of India and the world. Varanasi is a unique city where the past and present, eternity and continuity live side by side.

Legends have it that the holy city of Varanasi was founded centuries before the birth of the Christ. Varanasi is situated between the two tributaries of River Ganga- Varuna to the north and Asi to the south. Varanasi combines the name of both these rivers. Varanasi is mentioned in Holy Scriptures like Puranas, Buddhist texts and in the Mahabharata. The most fascinating part of the holy city of Varanasi is that almost all the activities seem to revolve around river Ganga and its Ghats. Life on the banks of the Ganga begins before dawn, when thousands of pilgrims come to the river for the holy dip. It is believed that the sacred river will cleanse them of their sufferings and wash their sins away.

With the sun rise the Ghats burst into activity. In the morning, the Ghats present a charged holistic atmosphere. Brahmins recite passages from sacred texts and priests perform various kinds of holy rituals. Perhaps Varanasi is the only place that stirs an individual to reflect about life, to contemplate about creation and the irrelevance of temporal wealth in the face of death. The burning Ghats at the edge of River Ganga keep reminding people that life is mortal. At the same time, the rising sun and the morning and evening rituals at the Ghats bring hope and optimism to thousands of beleaguered people. This is the essence of Varanasi- "the Gateway to Moksha."

The Vishwanath temple, dedicated to Lord Shiva, is the most sacred shrine in Varanasi. People from all parts of the world come to visit this temple. After its destruction in the medieval period, the temple was restored by Rani Ahilyabai of Indore in the 18th century.