Harshavardhana was a powerful Indian ruler in the 7th Century, who ruled from 606 to 647 CE.
Cultural India : History of India : Ancient India History : Harshavardhan 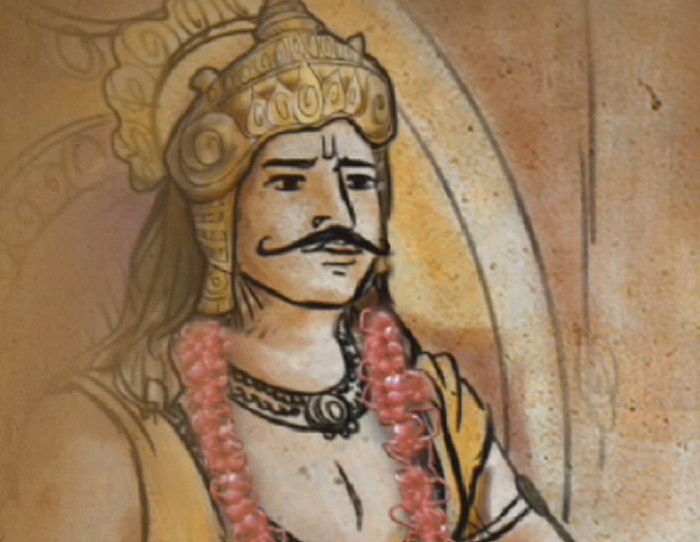 Ascension to the Throne

The Pushyabhuti dynasty, also known as the Vardhana dynasty, came into prominence after the decline of the Gupta Empire. Prabhakara Vardhana, the first king of the Pushyabhuti dynasty, was instrumental in consolidating the small republics and monarchical states that had sprung up in North India after the downfall of the Gupta dynasty. When Prabhakara Vardhana passed away in 605 CE, his eldest son Rajya Vardhana became the new ruler. Harshavardhana was Rajya Vardhana’s brother and they also had a sister named Rajyashri. Rajyashri went on to marry the Maukhari King Grahavarman. Rajyashri’s husband, King Grahavarman, was defeated by the Malwa King Devagupta and Rajyashri was imprisoned. King Devagupta was now ruling over the subjects of King Grahavarman. Also, Rajyashri was ill-treated during her stay in the prison. Unable to tolerate the treatment given to his sister, Rajya Vardhana marshalled his troops into the kingdom of Devagupta and managed to defeat him. Around the same time, a Gauda ruler Shashanka entered Rajya Vardhana’s kingdom. Unfortunately, Rajya Vardhana failed to make out the motive behind Shashanka’s entry into his kingdom. Shashanka had posed as Rajya Vardhana’s friend, and had gained knowledge about his military affairs. But in reality, Shashanka was an ally of Rajya Vardhana’s arch-rival. Rajya Vardhana never suspected Shashanka’s intentions and he eventually paid the price for it as he was murdered by Shashanka. When Harshavardhana came to know about his brother’s death, he waged a war against Shashanka and defeated him convincingly. He then ascended the throne and took over the leadership of the Vardhana dynasty at the age of 16.

Administration and the Empire

Harshavardhana ruled over the entire North India from 606 to 647 CE. It is said that Harshavardhana’s empire reminded many of the great Gupta Empire as his administration was similar to that of the administration of the Gupta Empire. There was no slavery in his empire and people were free to lead their life according to their wish. His empire also took good care of the poor by building rest houses that provided all the amenities required. In many texts, Harshavardhana has been described as a noble emperor who made sure all his subjects stayed happy. He did not impose heavy taxes on his people and the economy was somewhat self-sufficient. His capital Kannauj (in present day Uttar Pradesh) attracted many artists, poets, religious leaders and scholars who traveled from far and wide. He also maintained cordial relations with the Chinese. He even sent an Indian mission to China, establishing a diplomatic relationship between India and China. The famous Chinese monk and traveler Xuanzang spent eight years in his empire. He later recorded his experiences and even praised Harshavardhana for the way he went about ruling his empire.

During the course of his rule, Harshavardhana built a strong army. Historical records suggest that he had 100,000 strong cavalry, 50,000 infantry and 60,000 elephants during the peak of his reign. He was also a patron of literature and art. Thanks to the numerous endowments that were made to the Nalanda University, a mighty wall enclosing the edifices of the university was constructed during his rule. This wall saved the university from attack and invasions by the enemies and that ensured the prosperity of this great centre of learning. Harshavardhana’s interest in the field of prose and poetry is well-documented. A famous Indian writer and poet named Banabhatta served as the ‘Asthana Kavi’ (primary poet of the kingdom) in the court of Harshavardhana. The emperor himself was a skilled writer as he had penned down three Sanskrit plays, namely ‘Ratnavali’, ‘Priyadarsika’ and ‘Nagananda.’

During Harshavardhana’s reign, there was paucity of coins in most parts of North India. This fact suggests that the economy was feudal in nature. People were more concerned about growing their own crops rather than creating a market for the crops grown.

Harshavardhana’s kingdom was one of the earliest Indian kingdoms where we can see the practice of feudalism. This was similar to the feudal grants of Europe. Independent rulers, collectively known as ‘Mahasamantas,’ paid tribute to Harshavardhana and also helped him by supplying military reinforcements. This played an important role in the expansion of Harshavardhana’s empire.

Being one of the largest Indian empires of the 7th Century CE, it covered the entire North and Northwestern India. In the east, his empire extended till Kamarupa and ran all the way down to the Narmada River. It is said that his empire was spread across the present day states of Orissa, Bengal, Punjab and the whole of Indo-Gangetic plain. Harshavardhana defeated and conquered many kingdoms during his reign. When he thought of extending his empire beyond the Narmada River, his advisors came up with a plan to conquer South India. He then charted out a plan to attack Pulakeshin II of the Chalukya dynasty. Pulakeshin II controlled a major part of South India. Hence, Harshavardhana’s plan to fight Pulakeshin II suggests that he wanted to gain control over the whole of India. Unfortunately, Harshavardhana underestimated Pulakeshin II’s military prowess and was defeated in the battle, which took place on the banks of Narmada.

According to historical sources, Harshavardhana’s ancestors were sun worshippers, but Harshavardhana was a Shaivite. He was an ardent devotee of Lord Shiva and his subjects described him as ‘Parama-maheshvara’ (supreme devotee of Lord Shiva). In fact, ‘Nagananda,’ a Sanskrit play which was written by him, was dedicated to Lord Shiva’s consort Parvati. Though he was an ardent Shaivite, he was also tolerant towards all other religions and extended his support as well. He did not force his religious beliefs on his subjects and they were free to follow and practice the religion of their choice. Sometime later in his life, he became a patron of Buddhism. Records suggest that his sister Rajyashri had converted to Buddhism and that encouraged King Harshavardhana to support and even propagate the religion. He got several Buddhist stupas constructed. The stupas built by him on the banks of the Ganges stood at 100-feet high. He also banned animal slaughter and started building monasteries all over North India.

He built hospices and ordered his men to maintain them well. These hospices served as shelters to the poor and to the religious travelers across India. He also organized a religious assembly called ‘Moksha.’ It was organized once in every five years. Harshavardhana was also renowned for organizing a grand Buddhist convocation in 643 CE. This convocation was held at Kannauj and it was attended by hundreds of pilgrims and 20 kings who had come from far and wide. Chinese traveler Xuanzang penned down his experience of attending this massive convocation. Xuanzang also wrote about a 21-day religious festival which too, was held at Kannauj. This religious festival was centered on a life-sized statue of Buddha which was made out of pure gold. According to Xuanzang, Harsha, along with his subordinate kings, would perform daily rituals in front of the life-sized statue of the Buddha. It is still not clear if Harshavardhana converted to Buddhism. But Xuanzang has clearly mentioned in one of his writings that King Harshavardhana was not only favorable to Buddhist monks, but also treated scholars of other religious belief with equal respect. This suggests that he might not have converted to Buddhism.

After ruling over most parts of North India for more than 40 years, King Harshavardhana left for the holy abode in the year 647 CE. Since he did not have any heirs his empire collapsed and disintegrated rapidly into small states. The demise of King Harshavardhana marked the end of the mighty Vardhana dynasty.